The toy market in China has been growing rapidly in recent years. Not only are European and American toys thriving, the Japanese toy and hand-made markets are also booming, and domestic toy manufacturers are catching up. As a transfiguration junkie, seeing that Transformers has not done much other than making short-term assaults around live-action movies, I feel very anxious. So, in what areas does Transformers need to make a difference? 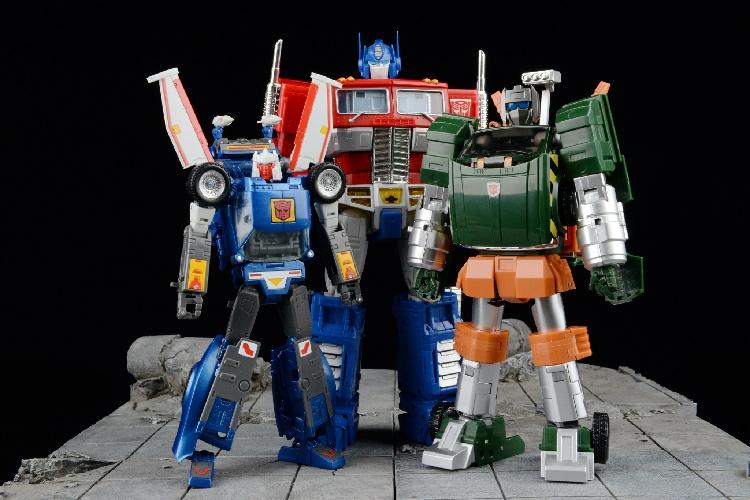 I. Strengthen the development and cultivation of Transformers culture

Taking the history of the 80s and 90s as a mirror, today’s Transformers propaganda should focus on cultural propaganda, changing to pure toy propaganda as the theme of cultural display, so that “Transformers” is no longer just a toy in the eyes of the public. Animation should be a complete cultural phenomenon with taste, hierarchy, connotation, art and ideology. Through publicity, through this change, first of all, it can better establish the image and reputation of the “Transformers” brand that is different from other similar toys, raise it to a cultural level, get rid of the category of “children’s toys”, and enable publicity It is well suited to China’s national conditions and will not produce negative effects in society, schools, and parent circles. Only in this way can the “Transformers” be truly accepted by the public. Secondly, we have also noticed that the toy fair is the mainstay of the current realistic propaganda methods.

Launching a toy exhibition can better allow visitors to get close to and understand toys. However, on the one hand, there are too many simple toy exhibitions, which will make the audience feel bored and feel that there is no new content, thus losing interest. On the other hand, There are too many toy fairs and similar activities at present. If they are held again, they will be homogenized with other similar activities, and the influence of the Transformers Toy Fair will become smaller and smaller. By launching a series of exhibitions and theme activities in reality, the brand of “Transformers” has been launched, especially by showcasing a large number of original figures, DIY works, photography works, FLASH, 3D animations, and let a large number of players explain in person Collecting experience, collecting experience, to explain the characteristics of toys, so that visitors have a close contact and perceptual understanding of “Transformers”, fully understand the difference between “Transformers” and other robot toys, and make it easier to make People discern the authenticity and correct wrong perceptions. And through this series of activities, high-profile publicity of the relationship between HASBRO and Transformers, which is more affinity, more vivid and more convincing than the direct sales of the manufacturers.

The limitations of print media have been discussed in the previous article. Obviously, continuing to promote in print media cannot produce sufficient effects. Instead, you should follow the trend and turn your attention to the Internet. In the 1980s, television became the mainstream of the media, and there were not many domestically produced animations in China. This coincided with the boom period of introducing foreign animations. At this time, animation-based publicity was in line with the trend and attracted a large number of children. However, the current situation Twenty years ago, it was very different. On the one hand, the country imposed strict controls on imported animation, and even stipulated that foreign animations were not allowed to be broadcast before 9 p.m. On the other hand, animation has flooded TV. Not only children are “immunized” against animation, but youth People basically don’t pay much attention to animation on TV, so relying solely on animation can no longer cause the sensational effect of the year. The network is not the case. The influence of the Internet is amazing.

The revival process of Chinese Transformers culture has been completed online by fans since 1999. And from the perspective of the age composition of Chinese Internet users, according to China Internet Network Information Center’s January 2009 China Internet Development Statistics Report, as of December 31, 2008, the number of Chinese Internet users reached 298 million, and the penetration rate reached 22.6%. , Exceeding the global average; the number of netizens increased by 88 million over 2007, with an annual growth rate of 41.9%, and the average online time of netizens was 16.6 hours. The age structure is: 10-19 years old accounted for 35.2%, 20-29 years old accounted for 31.5%, 30-39 years old accounted for 17.6%. Together, the three account for 84.3% of China’s Internet users, or 230 million people. From this, we can clearly see that it is the young people who are deeply affected by the “Transformers boom” in the 1980s and 1990s who are active on the Internet. These people have gradually become the backbone of society and are active in many important fields in China. They are the main force that promotes Transformers.

According to a survey conducted by AC Mowan.com, the largest Transformers special website in China, among the more than 80,000 users registered on the website, 90.4% were born between 1977 and 1987 (aged 22-32). 60.7% have an income of 100-5000 yuan, 20% have a monthly income of 5000 yuan or more, and 73.3% have monthly toy consumption expenditures of 300 yuan or more. In terms of occupation, civil servants and institutions account for 13%. All types of enterprise employees accounted for 48.8%, other occupations accounted for 16.6%, and students accounted for 15.2%. 6.5% of them are leaders at or above the middle level in their units. In terms of academic qualifications, 91% have a college degree or above. Undoubtedly, these more than 80,000 registered users of AC MouldPlay have huge spending power and a lasting interest in Transformers toys. They are an important consumer group in China’s Transformers toy market. And this is only a very small part of the Chinese youth group. The number of ACTOYS registrations is still growing at a rate of dozens of people every day. In addition, the interactive functions of the Internet also have great adhesion, which can attract people for a long time. At the same time, due to the huge advantages of the Internet, as stated in the report, “The Internet has increasingly become a medium that netizens repeatedly contact in their daily lives. This means that the value of the Internet as a mainstream advertising media is becoming more and more obvious. Because Internet advertising has the characteristics of accurate delivery, high audience value, and traceable effects, it may be unique in solving the problem of’wasted half of advertising costs’ in the future. The advantages.”

Therefore, whether it is from the market level of seizing the enthusiast group, or from the perspective of future communication methods and trends, grasping the Internet is the general trend.

Three, focus on the combination of realistic activities and media promotion

The first two suggestions mentioned actual activities and media propaganda respectively. By observing the official activities in recent years, we have to come to a conclusion: Although the results are obvious, there is still a certain disconnect between the actual activities of the official in the process of opening up the Transformers Chinese market and the media propaganda. For example, toy fairs and press conferences held in Kunming, Shenyang, Beijing, Shanghai and other places since 2007 are rarely reported in various media beforehand, and it is difficult to collect enough news and pictures on the Internet afterwards. This disconnect makes the domestic impact of such activities quite limited. Although it can occupy a place in the history of domestic Transformers culture, it cannot achieve far-reaching effects. Even foreign enthusiasts often know nothing about such activities. It is a pity that they can only get a glimpse at the top of a few major Transformers forums. It is recommended that in the future, we should fully grasp the media, especially the propaganda on the Internet, to make the event more influential and far-reaching.

Four, focus on the cultivation of fans

Transformers are rare toys and animation works that have a large number of adult loyal fans. This makes it different from other toys: Although its packaging is marked with 3+ or 15+, in fact a considerable number of consumers are adults. Undoubtedly, the support of fans in the past 25 years is one of the main driving forces for the lasting development of Transformers, and it is also a market supporter of Transformers. Japan should be very successful in capturing the enthusiast group. They continue to launch a series of nostalgic G1 toys, such as the TFC series, TFE series, and reissue series, and fans have also generously donated. This not only evokes the childhood memories of the lovers, but also maintains the attraction to them. In China, the “Transformers” boom of the year not only created a large number of enthusiasts who are active on the Internet and in reality, but also created a number of potential dives that may return to the “Transformers embrace” at any time. By”. Grasp these real and potential fans, through a series of publicity and activities, especially through continuous network promotion, and strengthen the connection with fans, so that the domestic Transformers fan group will continue to expand, not only can transform The Chinese market of King Kong has further expanded to the adult group, and can further influence their next generation through adults, thus fostering a longer-term market for Transformers. And the most effective way of nurturing is undoubtedly the first to promote various activities that are closely related to fans on the Internet and in reality. I think Gundam’s marketing in China can be used for reference.

From the G1 toy that was first produced in China and called the “South China Sea version” by today’s enthusiasts, to the universe classic series toys and the 08 animation series toys now placed in supermarket counters, Transformers’ sales in China have been The products sold in the United States maintain the uniformity of packaging. The only difference is that a Chinese label is affixed to the packaging of toys sold in China, and it is affixed to a very inconspicuous corner or back, which not only destroys the overall beauty of the packaging, but also is very unattractive. People pay attention.

The uniformity of the packaging certainly plays a role in establishing brand characteristics and logos, but when the English packaging is placed in a Chinese toy counter, it does not seem to be in harmony with the surrounding Chinese toy packaging. For buyers who don’t know much about the packaging features of Transformers, they don’t know that “transformers” are the famous “Transformers”. Those who are pirated or imitated, without exception, write “Transformers” in eye-catching Chinese, who want to buy “Transformers” for their children but do not know Transformers, they will naturally be attracted to them first. Therefore, the author believes that the Chinese culture of “Transformers” packaging logo is quite necessary. Through the comprehensive Chinese culture of the packaging text, the character files, character mottos, toy characteristics introduction and other content on the packaging can be easily understood by children and adult consumers with low English proficiency, which will not only greatly increase the consumption of toys. The attractiveness of consumers has made consumers feel a sense of identity, which has narrowed the distance between imported toys such as “Transformers” and the general public in China, and further popularized the knowledge of Transformers.

In addition, “Transformers” in Chinese is far more eye-catching than English, and it is also very easy to attract consumers’ attention. Of course, the classic “transformers” words should still have a place on the packaging. At present, a batch of new animated toys has been equipped with all-Chinese manuals, which is undoubtedly an excellent improvement.